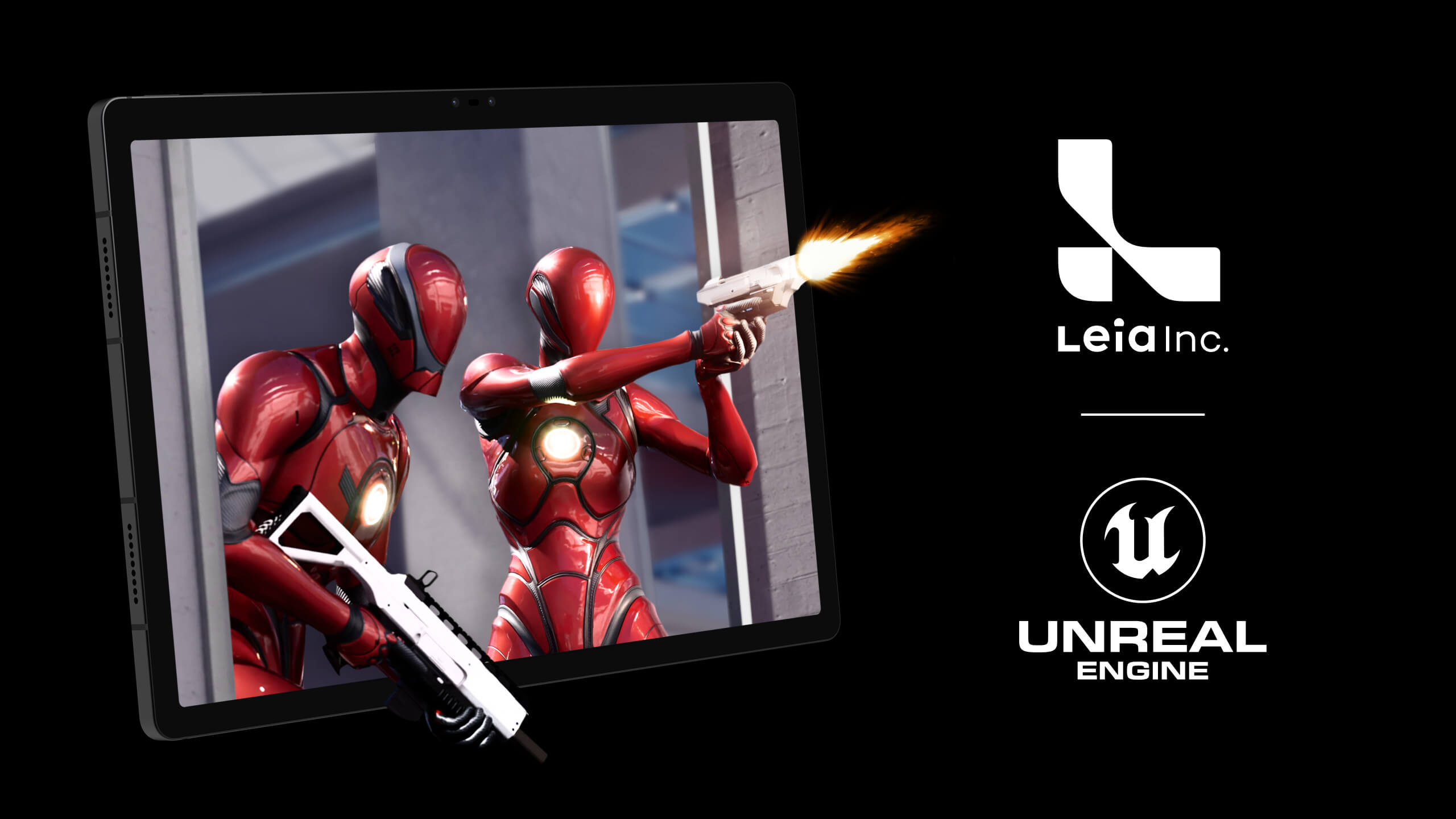 The new Leia Unreal Engine plugin is now available in the UE Marketplace! Developers can take advantage of Unreal Engine 5 (UE5) to create 3D content that literally pops right off a Lightfield display — a more accessible alternative to AR/VR eyewear!

‍
Unreal Engine is the world’s most open and advanced real-time 3D tool, and creators use it to develop blockbuster games, to power virtual sets for film and TV, and to deliver cutting-edge content and interactive experiences across live events, architecture, manufacturing and more.

This is why we worked hard to make the Leia SDK a seamless experience from preparing UE5-based content, to actually seeing it leap off the 3D display.

The Leia Unreal SDK is delivered to the user in the form of an Unreal Plugin which can be imported into Unreal projects with ease. The Unreal SDK provides:

“Our Unreal Engine plugin minimizes the guesswork and lets UE5 devs easily set virtual cameras in-engine,” says Lee Nagar, Director of Engineering, SDK & Tools for Leia Inc. “The plugin is an amazing shortcut to an optimized Lightfield experience while also reducing development time. Developers can often get their content running in Lightfield in less than an hour. The end result takes the world you’re building in UE5 and makes it stand out without compromising quality.”

You can download our first officially supported Unreal Engine plugin from Leia’s tools page or UE Marketplace. This plugin supports existing versions of the Unreal Engine (5, 4.27, 4.26).

‍Gaming is the most obvious place to start. Just to give you an idea of where things can go, the team here at Leia has been working on a game demo that’ll be playable at the upcoming AWE Conference. Richard Lester, Director of Content Development at Leia had a few thoughts to share about his experiences so far.

“Between the ease of working with Unreal’s Blueprint system and Leia’s simple camera setup, we are able to be up and running within minutes. Rapid prototyping is critical for us as a team when working with Lightfield content, but being able to convey and experience an idea in Lightfield quickly is an essential part of our workflow.”

Richard goes on to add, “Our plugin's integration with Unreal's cine cameras enables us to fine-tune and enhance our cinematic depth and views while the sequencer tools allow us to spend more time developing our animations in Unreal. It’s effectively reducing the need to leave the Unreal environment.”

If you think you’re good at classics like Asteroids, you’re welcome to swing by and see it for yourself (and shoot for the high score).

In fact, we challenge you to stop by the Leia booth (#125) during AWE to see if you can tell the difference as the visuals jump off our 3D Lightfield displays.

‍Simulations are another area where Unreal’s power is harnessed to amazing effect. As part of a recent test, our Lume Pads ran Unreal-based apps that showed fully manipulated models of vehicles that can be seen in 3D that pop above (and deeper into) the screen.

Those are just a couple quick examples of what’s made possible within Epic’s Unreal Engine. By incorporating our tools into UE5, we open up opportunities for people to experience worlds, play games, and get their jobs done with a whole new perspective.